"Our aim therefore is not merely to make the child understand, and still less to force him to memorize, but so to touch his imagination as to enthuse him to his inmost core." - Maria Montessori (To Educate the Human Potential)

Recently, the Elementary environment and the Casa environment at Cascade AN witnessed the lifecycle of a butterfly - from caterpillar, to chrysalis, to a beautiful lime swallowtail butterfly! In Montessori classrooms, guides (teachers) strive to present real life experiences and opportunities as much as possible. Exploring nature is always considered as more important than memorising and reproducing facts and knowledge.

"One transcendent experience in nature is worth a thousand nature facts." - David Sobel (Place-Based Education) 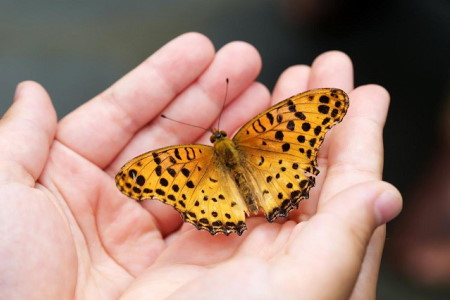 During this period, the guide didn't inundate the children with lessons that she had previously taught. She gave each child an opportunity to be responsible for the well-being of the caterpillar - the children took turn to feed, provide water, and clean out the aerated jar in which they had kept the caterpillar. The children were able to see, to quote them, "how much the caterpillar eats! It's eats and eats. It eats, poops, and sleeps".

One child wondered to the guide, "why does it eat so much? All it does is sleep and poop". The guide simply said, "We'll wait and see why it needs so much food". Pretty soon, the caterpillar built a chrysalis and became a pupa.

The children were excited to witness this in real life! In less than ten days it emerged as a beautiful butterfly during the weekend. Though the children were disappointed to have missed the hatching, they were still in awe of the caterpillar's metamorphosis.

One 7 year old child observed "wow, there is no remainder of the caterpillar in any part of the butterfly… not even in the colour. I thought it'll be a green butterfly… wow. THIS is why it needed that much food… to become something new entirely."